It is Africa’s largest national park, yet visited by few. Meandering through the plains and woodlands, the Rufiji River gives rise to a labyrinth of streams, channels and pretty lakes in a delicate water paradise.

Skeletal leadwood trees stand in glassy lagoons where terrapins ripple the surface. There are perfect pods of hippo, rainbow coloured birds and flitting butterflies on yellow cassia flowers. It is a vast wilderness area and superb for photography.

Wildlife of the Nyerere National Park

There is abundant game in the park, with Africa’s largest buffalo and lion populations, numerous leopard and thriving packs of wild dog. Wildebeest, zebra, impala, hartebeest, greater kudu and eland are all common. In the heat of the afternoon, herds of over 50 giraffe drink from the lakes, whilst elephant herds cross the channels to the lush islands. 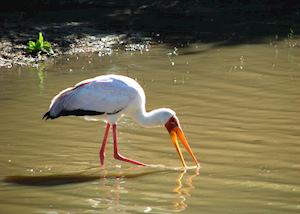 Boat trips are a speciality in Nyerere National Park and floating quietly along on the water is magical. You will see yellow-billed storks nesting in borassus palms, baboon at the water's edge and white-crowned plovers cleaning the teeth of crocodiles. The riverine forest is perfect for gentle rambles in search of blue samango monkeys and black and white colobus.

Driving in open 4x4s, you will see plenty of game but no other vehicles, as Nyerere National Park is a very peaceful park with only a handful of small camps.

Some of the camps in Nyerere National Park offer overnight 'fly-camping' trips. Taking a maximum of eight guests, tiny mobile camps are set up in remote areas with no roads. The day’s activities tend to focus on walking or travelling by boat, with overnight accommodation in simple dome tents, with hot bucket showers rigged in trees and lavish bush dinners set out at the water’s edge.

At most camps these trips last for one to three days but Sand Rivers organises extended trips.

This sample itinerary will give you an idea of what is possible when you travel in Nyerere National Park, and showcases routes we know work particularly well. Treat this as inspiration, because your trip will be created uniquely by one of our specialists.

We’ve selected a range of accommodation options for when you visit Nyerere National Park. Our choices usually come recommended for their character, facilities and service or location. Our specialists always aim to suggest properties that match your preferences.

Speak to a Tanzania specialist to start planning your tailor-made holiday...

Speak to a Tanzania specialist to start planning your tailor-made holiday... 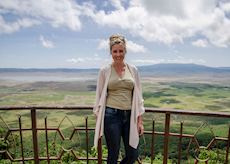